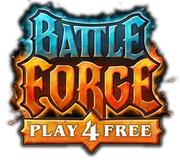 Play4Free is a new way for new players to get free access to BattleForge without any payment commitments, replacing the original BattleForge demo. Play4Free allows access to the entire game, but players only receive a selection of thirty-two Common cards. To prevent exploitation of the free cards that are received with these accounts, Play4Free players cannot create auctions, participate in trades, or log in to high-population (crowded) servers until they've reached PvE rank 4 or PvP rank 10. Free cards are also only given to the first character created on an account.

Eight Common cards from each of the four Factions are included. Since there are not enough cards to make a full, single-colored deck, Play4Free players will need to be comfortable building Hybrid Decks or otherwise upgrade to the retail game.

In general, cards are obtained by purchasing them using BattleForge Points, of which Play4Free players begin with none, or by trading with players. Since the initial cards are all Common rarity and are also given to all players who purchase the retail game, Play4Free players are likely to only find trades for other common cards. However, some of these cards are considered valuable commons, such as Giant Wyrm and Swamp Drake. An enterprising trader may be able to negotiate for some less-valuable Uncommons or possibly least-desirable Rares, but this is not for sure. Further, these cards are valuable because they're powerful; trading them away is not recommended.

In the end, rounding out this collection of cards will require some BattleForge points, meaning players will need to invest some money into the game.

Both PVE and PVP will earn you gold. Gold can often be used to buy cards from other players, check the offical forum trading section.

Retrieved from "https://battleforge.fandom.com/wiki/Play4Free?oldid=28620"
Community content is available under CC-BY-SA unless otherwise noted.