The Lost Souls are revealed as a faction relatively late in the Battleforge tale, although their creation came much earlier, and they are in fact the source of the Twilight Taint that instigates many of the events of the Titans storyline. They are also the nemesis of the final tale, the most recent map, Empire. Their power comes from the In-Between, the dimension of souls, but they have power over both space and time in the mortal realm. 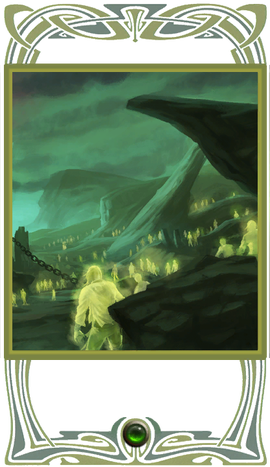 Akylos and
The Wailing Lands

Whenever a soul leaves a dying body, it passes through the misty shores of Akylos. There it meets the shadows of its past. If the soul finds its way through Akylos it will find a ship of stone to take it over the Water Bridge across the Maw of the Earth to the Wailing Lands. There, the soul must wait until it has made peace with its past and cleansed itself from all bonds to the mortal world. Only then may it walk through the Gate of Ashia into the Peaceful Light and an existence of pure joy.

The gates of Akylos were closed to the dead; only after the Skylords opened them could the Lost Souls pass to the afterlife.

Retrieved from "https://battleforge.fandom.com/wiki/Lost_Souls?oldid=28583"
Community content is available under CC-BY-SA unless otherwise noted.