Moloch is a fourth era walking siege tank. It is slow, but its damage output is out-of-control. Moloch is also the most costly unit in the pure fire side and that probably gave it its name ("Moloch" can refer derivatively to any person or thing which demands or requires costly sacrifices.)

The damage reduction versus ranged and magical attacks makes Moloch a nice tank versus ranged-heavy opponents. Further, each upgrade increases from 50% to 70% to 90%, at which point Moloch is nigh impervious to archers, flying creatures and wizards.

His siege ability gives him 10k attack without any upgrades on buildings, making it a one-hit kill on most buildings in the game.

Aside from having a very high number of hitpoints, and an out-of-control attack, being a melee fighter, it is still susceptible to melee attacks, and since it cant attack air units, it should be supported with ranged units, flying units or spells. 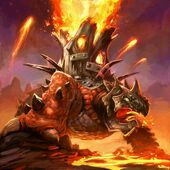 Add a photo to this gallery

Retrieved from "https://battleforge.fandom.com/wiki/Card:Moloch?oldid=27491"
Community content is available under CC-BY-SA unless otherwise noted.