The sorceress can provide a targeted friendly unit with a substantial damage shield for a very reasonable 20 power. This can be quite helpful when storming large enemy formations early in a game and amassing large mob of T1 by shielding focused units as there are no healing spells for T1 Frost.Besides, sorceress is still very useful at tier 2 , or even tier 3.

She requires considerable amount of micro-management to use properly, but that is typical of many of Frost's powers. The cool-down time for her ability is fairly fast, so 2 sorceresses operating simultaneously can more or less keep 2 friendly units in combat permanently shielded. Her best friends are Lightblade, who can force enemies to target him instead of her, and cards with passive damage reduction such as stoneskin or Imperials.(The effect apply to Ice shield).

Note: One unit can have only one Ice Shield on it. Damage Absorption effects (e.g. Ward of the North) do NOT reduce the incoming damage on shielded units as long as the unit has the shield.

Every 2 seconds, unit hurls an ice blast that deals 17 damage to enemies in a 5m radius around its target, up to 25 in total.

Activate to apply Ice Shield on a friendly unit. Absorbs up to 520 damage for 30 seconds. Reusable every 10 seconds. 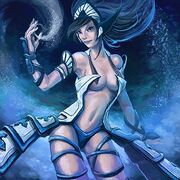 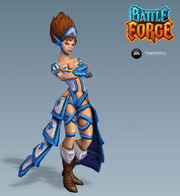 Add a photo to this gallery
Retrieved from "https://battleforge.fandom.com/wiki/Card:Frost_Sorceress?oldid=27101"
Community content is available under CC-BY-SA unless otherwise noted.